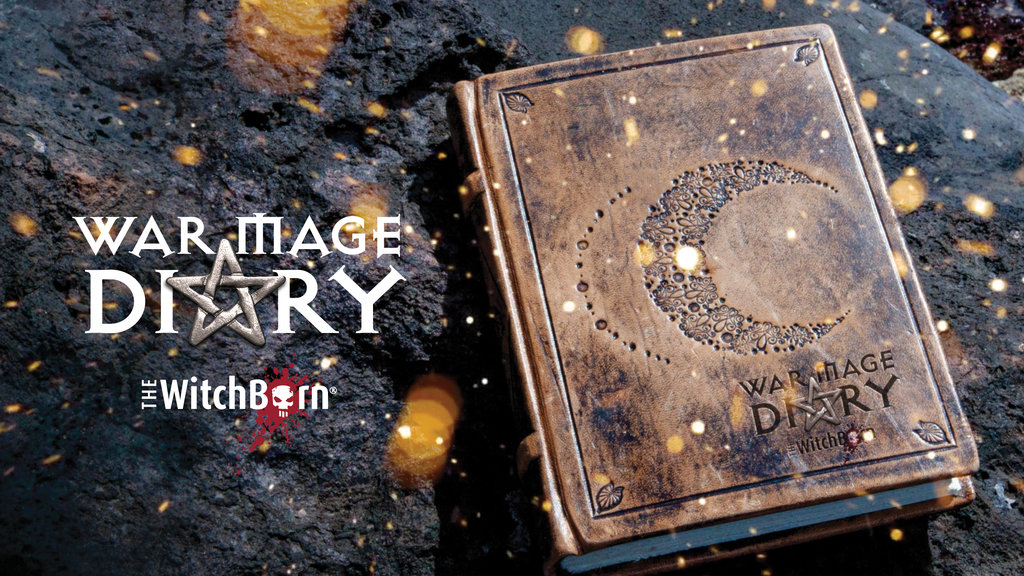 Could you explain the difference between Dragon Moon and Wandering Forest adventures?

This year Dragon Moon is getting a name change and update to Wandering Forest. If you already own Dragon Moon, this update will be free. This update is similar to what we did in changing Asylum to The Pit earlier this year.

So what’s in the update?

First, is the new web app. As adventures are updated, the new apps are found at www.WitchBorn/apps. This allows you to access the apps from any Internet-connected device from a phone to a tablet to a laptop to PC—even a Kindle. The graphics on these apps are sharper and consistent across all devices.

When I update apps I can’t resist expanding them too. There will be at least ten new encounters in the Wandering Forest app. Lots more WitchBorn and lots more challenges!

Team games with multiple players working together as runners or hunters are the focus of this update. Playtesting has given us some absolutely fantastic new rules.

The Bounty alternate adventure will be broken out on the app more clearly as an alternate way to play and the encounters will be written exclusively for The Bounty.

There will be a new cooperative game option to play as well! In this version, players work together to escape the Wandering Forest while a GM plays Faelwyn and the wandering trees to make sure they don’t! You can get some insight into Faelwyn’s evil on page 95 of the Campaign Rules.

With all these improvements, Wandering Forest will remain a fun-filled and challenging adventure for both beginners and veterans!

Does the Nightfall expansion contain any physical components if you already own Asylum or The Pit?

The Asylum/The Pit adventure uses a small portion of its battlemap. Nightfall is a stand-alone adventure that uses the vast majority of The Pit battlemap. With this one you’ll get an all-new web app and a new guide.

You’ll meet a lot of characters you know from The Pit again when a WitchBorn army threatens Asylum. Dark Trader and Brother Asylum ask you to hunt for an infiltrator holding the key to stopping the onslaught. Don’t take too long, the citizens of Asylum are counting on you!

P.S. I did a video on web apps with a brief glimpse of Nightfall on a YouTube video here: https://youtu.be/76wUxTA-8B0

How many times you can play an adventure? How different is each play-thru thematically and gameplay-wise?

Over the years we’ve played Enter Perdition at least 1000 times. No joke. There are so many randomizing variables, I can honestly say we’ve never played the same game twice. I’ve even had some vets tell me it’s one of their favorites.

THE APPS ARE AT THE CORE. There are tons of random encounters and you might use less than 5 every time you play. You could play over and over and not get the same one twice. And then they change. You might find a troll the first time you play who just terrifies your warriors but find a pair the next time as your war clan gets tougher. You learn new tactics. Your opponent reading the app and playing the trolls you encounter learns nasty new tactics too.

YOUR WAR CLANS GROW AND CHANGE. An encounter that once gave you fits is a piece of cake once you’ve bought the proper equipment to deal with it. Burn that troll with a torch so it doesn’t Regenerate on you! Playing brings constant improvement but the challenge ramps up too.

YOUR WAR CLANS ARE ALWAYS CHANGING. Every time you play, warriors earn experience (we call it Shadow), allowing them to improve and level up to earn hundreds of new skills or ability increases.

THEN, THERE ARE ALTERNATE STORIES. Most adventures have alternate ways to play. In Enter Perdition, team up with a buddy against the wicked WitchBorn centaurs of the plains. In The Pit, save Dark Trader and his tavern from the Norn witches known as the Coven from seeking vengeance. In Wandering Forest, return a prisoner for a reward—but you must safely navigate through the Wandering Forest. These and more options not only change the scenarios but your strategies completely for constant and new challenges.

PLAY WHATEVER YOU WANT. Start with Enter Perdition but next game have drinks in The Pit, home of the world’s last standing bar. Jump back to Enter Perdition for a few games and then get hooked on playing team games in the Wandering Forest four games in a row. There’s no set order and every game will be different.

Enter Perdition, The Pit, and Wandering Forest are fairly safe for beginners and have options to play no matter how powerful you get. For Wailing Citadel, The Searchers, and Nightfall, the challenges are greater but the rewards are bigger too. You’ll probably want to get in a dozen or more adventures with the first three before taking these on (and there are suggestions in the guides on when you are ready).

THE STORIES GROW WITH YOU. You can never relax. I just had harpies carry off and eat one of my Paladins who I had been developing over 27 games. I had ample opportunity with two of my killer Archers to save him. I missed easy shots over and over. I just couldn’t shoot the harpies down.

Last Updated At: 05/29/19
Still Have Questions? Contact Us!
BackerKit FAQ

BackerKit is a service that crowdfunded project creators use to keep track of hundreds to tens of thousands of backers—from shipping details, pledge levels, preferences and quantities, whether they have paid or had their card declined, special notes, and everything in between!

The BackerKit software and support team is independent from the campaign’s project team—BackerKit does not handle the actual reward shipping. For more information about the preparation or delivery status of your rewards, please check the project's updates page.

How does BackerKit work?

After the campaign ends, the project creator will send you an email with a unique link to your survey. You can check out a walkthrough of the process here.

I never received my invitation. How do I complete the survey?

The most common reasons for not receiving a survey email is that you may be checking an email inbox different from the email address you used to sign up with Kickstarter, Indiegogo or Tilt Pro account, or it may be caught in your spam filter.

Confirm that the email address you are searching matches the email address tied to your Kickstarter, Indiegogo, or Tilt Pro account. If that doesn’t work, then try checking your spam, junk or promotions folders. You can also search for "backerkit” in your inbox.

To resend the survey to yourself, visit the project page and input the email address associated with your Kickstarter, Indiegogo or Tilt Pro account.

How do I update my shipping address?

When will my order be shipped, charged or locked?

That is handled directly by the project creator. BackerKit functions independently of the project itself, so we do not have control of their physical shipping timeline. If you want to check on the project’s status, we recommend reading over the project's updates page.

I completed the survey, but haven't received my rewards yet. When will they arrive?

As BackerKit does not actually handle any rewards or shipping, the best way to stay updated on the shipping timeline would be to check out the project's updates page.

You may not have an account. You can create an account by clicking the account confirmation link in any survey you have. You can also get started with signing up for a BackerKit account here.

If you have created an account and have gone through the previous steps, but are still having trouble, please reach out to us via the contact form. Let us know any important details (browser type, mobile device or computer, OS, etc).

Do I need a BackerKit account to fill out/receive my survey?

You may or may not have an account set up, but you can access the Account Request Confirmation from the bottom of the confirmation page of any of your surveys.

How do I update my email address in my backer account?

Contact BackerKit support by signing in to your BackerKit account, and then clicking on “Need Help?” in the top right side of the page! We will ask you to verify that you are the account holder; and to provide the new email address to which you would like to update your account. You can verify by your ownership of your backer account by either of the following methods:

* Sending us a screenshot of your original pledge that shows your backer number on Kickstarter (or Indiegogo, etc).

While signed in to your BackerKit account, click on “Need Help?” on the top right side of the page.

BackerKit is a service that crowdfunded project creators use to keep track of hundreds to tens of thousands of backers—from shipping details, pledge levels, preferences and quantities, whether they have paid or had their card declined, special notes, and everything in between!

The BackerKit software and support team is independent from the campaign’s project team-BackerKit does not handle the actual reward shipping. For more information about the preparation or delivery status of your rewards, please check the project's updates page.

A backer account helps backers (like you!) to keep their surveys organized. Oftentimes, people who support projects that use crowdfunding support multiple projects across crowdfunding platforms. Any project that uses BackerKit will appear in your BackerKit account, and will allow you to help keep track of updates such as address, items, timelines, support, etc.